HYBRYDS – DREAMSCAPES FROM A DARK SIDE / VOICES WITHOUT A SOUND – 2CD

HYBRYDS ‘The next volume in Hybryds reissue programme is a double CD collecting two albums: “Dreamscapes from a Dark Side” and “Voices without a Sound”. After the well-received reissue of “Mistrust Authority & Tectonic Overload”, which contains a more rhythmic, cybernetic face of the Belgian project, “Dreamscapes” (originally released in 1996) is a return to very atmospheric regions. Next to “Soundtrack for the Aquarium”, it is the most ambient album in Hybryds discography. Tracks full of stillness are interrupted by samples from several iconic films. “Dreamscapes from a Dark Side” is certainly a unique disc in the discography of the Belgian project.
The later album “Voices without a Sound” perfectly goes with the first disc (it contains recordings from 1999-2001), originally released under the name Na-Dha. The recordings on this one are the effect of improvisations recorded live which also can be heard perfectly. Sandy Magthea Nijs shows here a slightly more ritual face of his music, a bit closer to the early recordings of Hybryds. Still, it is a pensive, moon music.
The album has been digitally remastered from the original master tapes. Sandy Nys provided the cover based on the previous editions. The CDs are housed in a digipak sleeve and the album is strictly limited to 500 copies. 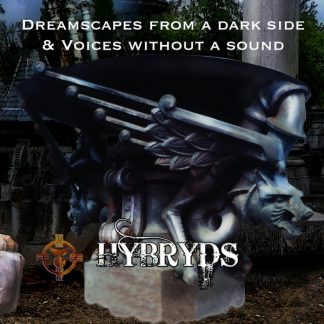