The next Zoharum offering is the split album between Russian RE-DRUM and Swiss B°TONG. Each project has prepared 30 minutes for this special release. Avid Zoharum observers already know Pavel Aleshin’s project called Re-DrUm. 5 years ago we released his album “S” and it was our 7th release. In the meantime, he has been touring extensively plus released one full album, a digital EP and offered his music on a split release with Rovar17. Now Pavel returns to Zoharum with 3 new tracks of contemplative nature. They are full of slow acoustic sounds and field recordings. His sound on “Hush!” is less droney than on “S”, but much more organic and laid-back. The second part of this release belongs to Chris Sigdell and his renowned project b°tong. In contrast to Re-DrUm, “Ascending in the Light of an Alien Sun” is a different affair – a dark, brooding affair full of oily drones and treated sounds. Again, composed of 3 songs, it takes you on a trip to the desolate factory inhabited with ghosts of its previous owners. This special project is released in a mini-vinyl sleeve and is strictly limited to 400 copies worldwide. ZOHARUM Zohar 065-2 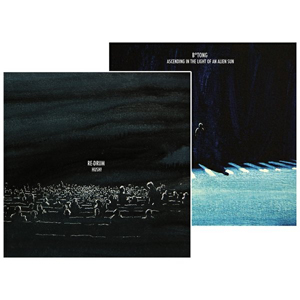