At Ulleråker, where the anguished shrieks echos inside the asylum walls until the lungs can scream no more from exhaustion. A cursed existence doomed to the hell of chronic care in containment and restraint. Restless days and sleepless nights, spent in dismal corridors and bleak day-rooms. Coffee, cigarettes, oatmeal and medication. All vestiges of your individuality washed away by time, leaving only an unfathomable cavity inside your institutionalized soul. Join the legions of faceless ghouls in slumbering stupor. Tormented by the demons of the mind, by the white-coated devils and their nurses. Controlled, studied, observed. Caged for your free will. The third eye nailed to the wall. Gazing into the nightmarish reflections in the mirror-shards of your shattered self. Falling backwards into the debacle of madness. Surrendering to the all-devouring flood of primordial fear. As you disappear into the depths and your ego disintegrates, finally submitting to the collective grey non-existence, Ulleråker drags you down into the black waters of its abysmal vortex. “At Ulleråker” was originally released on tape by Styggelse in 2005, now released on CD by Old Captain. A concept release dealing with the personal and collective hell inside Swedish mental asylum Ulleråker. An early tapework by Alfarmania – a classic in the field of death industrial / power electronics. Accompanied here by “Spännbädden”, a previously unreleased recording from 2006-2007. Comes packaged in a 4-panel Digipak with artwork and layout by Kristian Olsson. Edition of 200 copies.
Alfarmania – At Ulleråker
Label: Old Captain – OCCD13
Format: CD, Album, Limited Edition, Reissue, Remastered
Country: Ukraine
Released: 2015
Genre: Electronic
Style: Power Electronics, Noise, Industrial
Tracklist:
1 At Ulleråker 30:40
2 Spännbädden 37:35 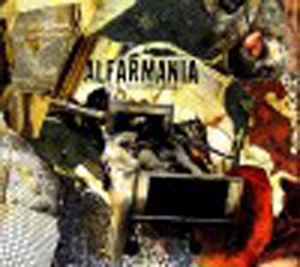