Awake the New Dawn! Aeterna is a new apocalyptic folk outfit from Germany, born in 2007. In the beginning it was intended to be the strictly personal musical outlet for founding member Birthe Klementowski, well-known from her artwork for Cold Meat Industry’s Desiderii Marginis, :Golgatha: and Dawn & Dusk Entwined, but the dynamics between Alpha and Omega brought forth something new. The dark and brooding atmospheres invoke the mood of decline and decay, a direct resemblance to the artist’s photography. The album ‘New Dawn’ ultimately presents 11 songs about the decline and rebirth of culture. Aeterna does not serve ideological pattern but presents the musical and visual output as an inspiration for the audience. Death is always the beginning of a new circle. Out of hopelessness arises a New Dawn. As the earth faces the end of resources and the destruction of nature, the loss of spiritual values and the total virtualisation of the all-day life, mankind experiences a self made inferno. We have to turn and find new ways? Aeterna is a prayer for these new ways. For new spiritual values to ignite the fire of enlightenment once more. To create something new out of the old roots. The Old Gods eventually may not return, but the Eternal Principle is still there. The music of Aeterna is based on ritualistic and shamanistic structures, mainly acoustic sounds, and invoking chants – all based on the dualistic principle of male and female energy – Alpha & Omega. Aeterna is a trans-modern, neo-shamanistic, animistic art project. A Luciferian hymnus to awake the New Dawn? Images and Artwork: Birthe Klementowski/www.birthe-klementowski.de Band myspace: www.myspace.com/aeternaworld 01 – Invocation (3:21) 02 – End of Days (3:46) 03 – New Dawn (3:04) 04 – Waves (2:57) 05 – Wild Hunt (4:43) 06 – Wolfcross (3:13) 07 – Transition (4:13) 08 – Ultimate Will (3:18) 09 – Usura (4:18) 10 – Fire (3:56) 11 – Tears (7:15) 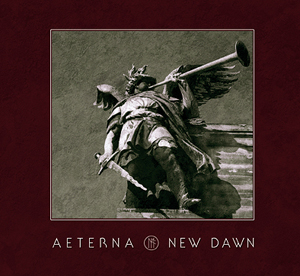