Humanity Needs No Funeral, the first full-length album from AERE AETERNUS, was released on the French label Kaosthetik. With a multi-national and eclectic lineup, the band comprises Alex (MACABRE OMEN, THE ONE, RAZOR OF OCCAM), Claudio Alcara (FROSTMOON ECLIPSE, STROSZEK), Cyr (DARK SANCTUARY, ELKTRONIK SCIETY) and Radu. Drawing on the wide range and considerable musical experience of its members, AERE AETERNUS creates a dark, disturbing atmosphere that probably best fits within the ambient and minimalist genres, and which the band themselves describe as “half misanthropic ritual and half sex ritual.” The dominant atmosphere combines a sense of impending insanity with sexual deviancy and a large dollop of occultism, creating a dark and troubling misanthropic sojourn that is relatively unique. The final track is probably the most musical, as it is centred on a guitar arpeggio, but no such concessions to convention are present elsewhere on this deeply troubling disk. The accompanying video (CD version ONLY) of “Invocation” shows a Satanic ritual in all its kitchsy glory. Recommended for those looking for something a darker than the usual entities. “When Dark Ambient meets Industrial Deviance” KSTK006 – GATEFOLD LP + POSTER (Kaosthetik) 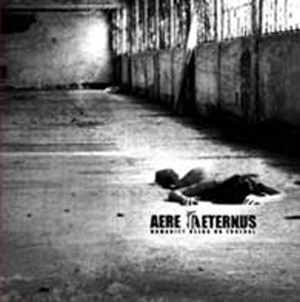