THE SHAPE OF SOLITUDE is Vidna Obmana’s collaboration with Belgian guitarist and synthesist Serge Devadder. The album marks once again Vidna Obmana’s constant strive for experimentation and expanding his oeuvre with new combinations, blending genres so to speak. Influenced by way more than only the ambient music he stood for, Vidna Obmana believed in music that exist beyond classification and that also the genre in which he operated could use way more than the standard approaches. THE SHAPE OF SOLITUDE is an unique album in his oeuvre: bold, abstract, emotionally-charged and eerie.
“The Shape of Solitude takes Vidna Obmana’s music nearer the realm of the Avant-Garde. This collaboration with guitarist Serge Devadder demonstrates Vidna Obmana’s willingness to lead the audience, not persue them; fans of his gentle soundscapes or tribal grooves will find themselves challenged by this CD. The source for all the pieces was the guitar. Devadder’s already contorted riffs were bent even further by Vidna Obmana’s studio wizardry. Even the pacing of the album is somewhat difficult: a piece of dissonant outside music – followed by something warm and mysterious – into a harsh studio mutilation of yet another twisted guitar loop… The music is questioning and plaintive, completed only by a listener’s comprehension. Fortunately, the music is as interesting as the process by which it was realized. At moments edgey and inpenetrable, at others deep and serene, The Shape of Solitude is a successful experiment in the use of timbres and sounds to portray moods and feelings avoided by most musicians.” – Chuck van Zyl/STAR’S END 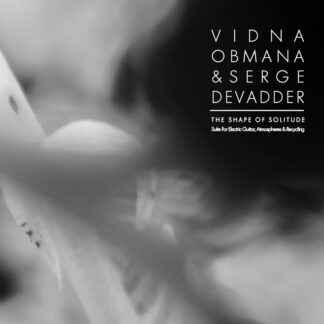