or fans of: JOY DIVISION / NEW ORDER / DEATH IN JUNE

IKON are one of the oldest members of the Gothic / New Wave scene ; Inspired by bands like Joy Division and New Order IKON started in 1993 and are still active today. Their own mixture of Gothic Rock, Post Punk, Dark Wave and NeoFolk is as versatile as it is consistent and band head Chris McCarter has always remained true to himself and his fans.

Now they are going to celebrate the 20th anniversary of their 4th album from 2001 with an special edition.

„On The Edge of Forever 2CD (20th Anniversary Edition)“ contains IKON’s 4th studio in a remixed & remastered version plus a Bonus-CD ( with unreleased material and rare b-sides ),

comes as 6-Page-Eco-Digifile and is limited to 500 copies.

CD2 (B sides and unreleased tracks): 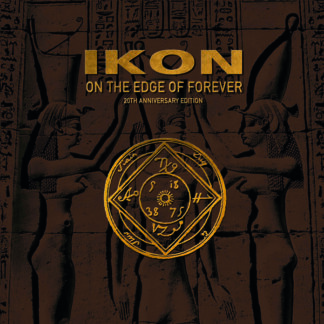