INSTINCT is the new Bruta Non Calculant album, after “World In A Tear”, LP (2013) , “La Que Sabe” LP (2014) and a four-track 7″ (2013).
BRUTA NON CALCULANT is a musical project of Alaxis Andreas G. Weaving in and out of the underground for nearly 20 years , he is known as a precursor for his unique analog electronics songs, his minimal synth music and his esoteric industrial folk projects such as:
Le Syndicat Electronique, La Séduction Des Innocents, Charles De Frontanel, Shiny Black Mater.
” Instinct leads the animals all their life.
The same process is for the humans until their death.
Believe that human is superior to animal is an error.
Human kills and procreates for his survival…without conscious !
He speaks about his rights or his free will, but in true, he is a
slave of his heredity (it is the meaning of the esoteric Cain’s story in the Bible.)
Human doesn’t understand the mystic sentence coming from the new testament :
“Whoever eats my flesh and drinks my blood has eternal life”.
The results of his millenium ignorance are : misery, war and suffering on earth.
Human strikes his own nature (and Nature !) to survive ! …nonsense ! Human is called to become an overman ( “ein Übermensch”, for those who know,
in the pure traditional meaning of the word. ) when his arm is stopped by the Angel,
like the Abraham’s arm on the sacred mountain !
No more scapegoat !The only one to kill and eat….is ourself, our heredity, our ignorance : our own “pig” inside.
And the old religion (that doesn’t want to eat “its pig”) and its heavy laws will die, naturally !
INSTINCT will give away to intuition…and the return to our Tradition will be possible. These words are for “les hommes de bonne volonté ! ”
(Alaxis Andreas G.)
CatNr: DV62 : EAN: 4013438020805 ; 6 Page-Eco-Digifile
label: Dark Vinyl / file: Minimal – Dark Wave 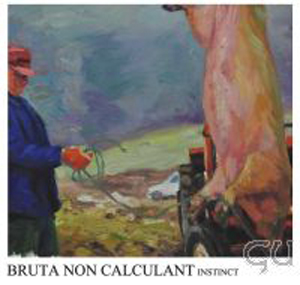