Zahgurim was a TOPY-affilated band formed in the mid Eighties by Paul Ackerley and William Vince. They recorded one album, „Moral Rearmament“ for Dossier side label Atonal. It was produced and mixed by Paul Ackerley and William Vince with Simon Crabtree and Julian Gilbert (both of Bourbonese Qualk) at The Old Ambulance Station, Old Kent Road, London on October 24 and 25 1984. Their last live performance took place in 1989 – until the band agreed to play at Klanggalerie’s 25th anniversary festival „Klang 25“ in Vienna in June 2018, the first gig in 29 years! For this unique performance the band consisted of Paul Ackerley, George Ackerley and Simon Crab. The set was a mix of old and new songs, and was recorded for this CD release. In addition to the live recording, we include a song that was recorded for the event and given away as a download, plus a song that was entirely written by Zahgurim during their stay in Vienna. We are making this item a very limited collectors‘ edition – numbered to only 150 copies, and when they’re gone, they’re gone. Full tracklist: 1. New Flesh (Live) 2. Presence (Live) 3. Silent Leap (Live) 4. The Living Room (Live) 5. Sprat Song (LIve) 6. Shower Scene (Live) 7. The Living Room (Studio Mix) 8. Dead Man’s Chapel. Price: € 17,-/copy incl. worldwide shipping. 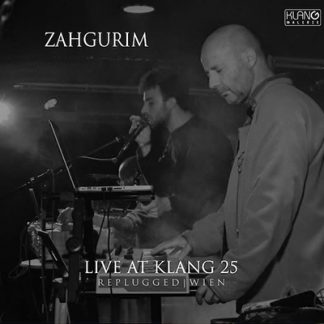