LTD150
The first recordings for The Corvidae Cabal were in 2008, and are unreleased. When I started recording again more seriously in 2016 I used this name for things that didn’t quite sound like Gruntsplatter to me. Ultimately, this project will run parallel with Gruntsplatter, but give me an outlet for different sounds that don’t quite fit in. It’s not dissimilar to Gruntsplatter, but it’s not the same either, and I feel like I have more leeway to go wherever I want with this project. Dark atmospheric electronics, some of it with beats, some not.

The name is a deliberate nod to the idea of diverse sounds. A cabal is not one person, it is many. I’m realizing everything I do still sounds like me to a degree, but The Corvidae Cabal is for stretching my curiosity and exploring a bit more than Gruntsplatter. Tied in with that, the themes of this project are more esoteric and Fortean, than the kind of social commentary that has been the bedrock of Gruntsplatter.
A numinous foray into the dim parlours and spirit lodges that seek to facilitate communication between the realms of life and death. Evocative, malleable Dark Ambient at the precipice of the thrumming veil. 4 panel digipak. 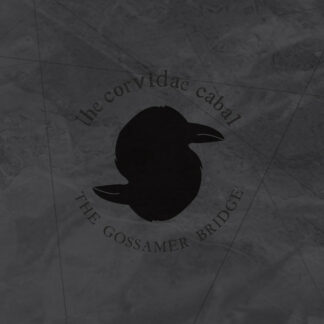