This double-vinyl release of VUKOVAR’s new album Monument sees their first collaboration with iconic English artist, musician and composer Michael Cashmore (CURRENT 93/NATURE AND ORGANISATION), to turn the three shades of VUKOVAR into four; a marriage made in purgatory. This album reflects a Wonderland gone sour, fragile music box chimes collide with shards of harsh noise, motorik rhythms brood menacingly beneath lush synthetic textures and angelic voices that contort them into contempt in these incredible recordings.

Cashmore is revered by music lovers as one of Britain’s most influential and inspiring composers. In the mid 80’s Cashmore came into contact with David Tibet (ex-PSYCHIC TV) of the group CURRENT 93, which he later joined in 1990. For the next 20 years Cashmore wrote almost exclusively all of the music for the group including the seminal albums „Of Ruine or some Blazing Starre“, „Sleep has His House“, „Soft Black Stars“ and „Thunder Perfect Mind“. Not only is he responsible for influential songs like „A Sadness Song“, „Whilst The Night Rejoices Profound And Still“ and „The Bloodbells Chime“ which are long considered classics in the progressive folk and industrial genre, he also has written music for British wave legend Marc Almond (SOFT CELL) and avant garde sensation Anohni (ANTONY & THE JOHNSONS). An artist renowned for his eclectic work and poignant nature of his music, Cashmore has also collaborated with the likes of Nick Cave, Bill Fay,Tony Visconti and many more.

VUKOVAR formed in 2014 in a crumbling placefiller town in the North West of England and set about creating their own world within an otherworld. In their short yet eternal time, they have been relentlessly productive; ‘Monument’ being the 6th full LP after their highly well-received previous 5: ‚Emperor‘, ‚Voyeurism‘, ‚Fornication‘, ‚Puritan‘ and ‚Infinitum‘. They have had amongst their ranks Rose McDowall (STRAWBERRY SWITCHBLADE/PSYCHIC TV/COIL/CURRENT 93), collaborated with and 80’s b-movie star Dawn Wildsmith, worked with world renowned hyper-realist Andrzej Klimowski, and actor, TV writer and man of all round good taste Graham Duff and others. Monument comes as a double-vinyl album in a gate fold sleeve, pressed on 180mg magenta vinyl with full colour inner sleeves and a CD of the album included as a bonus in a full colour slip case. This remarkable package is housed within stunning new artwork by Cashmore himself and is mastered by Michael Lawrence. ‘Monument’ lives up to its title, an essential release by two artists at the peak of their creative powers moving on ever forward in increasingly surprising ways. 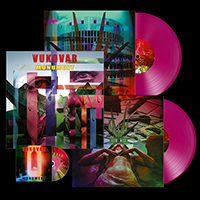