Driven by my love for solo albums by drummers and percussionists like Jon Mueller, Wil Guthrie, Nick Hennies and Burkhard Beins, I’ve made Drum Solos. It’s my take on a solo drum record, despite the fact that I lack the talent to hit a steady beat or a play a drum roll. Instead, I used the sounds of a drum kit as a source for further processing. I booked a rehearsal room with a drum kit, and recorded as much sounds as I could in one afternoon. Hitting, bowing, stroking, whatever ways I could find to create sounds, I recorded. And these soundfiles were chopped and screwed till it sounded like what you hear on the album. Each track focusses on one part of the drum kit. I like to think that purposefully employed limitations like that make me more creative, and my work more focussed. It’s part of the aim to make my music as minimalistic and ‚pure‘ (whatever that may be) as possible. In this case it resulted in a short but varied and at times meditative album that might not have any virtuoso drum acrobatics on it, but shows its quality on a more subtle level. Another great experimental and droning Machinefabriek album. Packaged in a gold printed jacket. BACKWARDS BW12 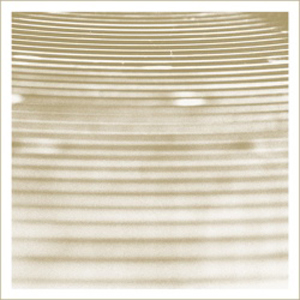