Originally released 1985 as a Control-Domination cassette and presented here on picture disc vinyl.
3″ cd contains interview excerpts originally from Con-Dom (Mike Dando) IM MEDIA 2 cassette first circle released in 1994.
All the moving parts are accumulated in the ‚gutter‘ and a packaged in a custom die cut sleeve with printed inner sleeve of the original cassette art alongside a large sized unique poster with the longform ‚CONTROL-DOMINATION‘ logo created just for this commemorative release.
The spirit of Con-Dom is felt at it’s most crushing and raw incarnation on ‚dragged into the gutter‘. Taken from some of this earliest live assaults and beautifully offset with the thoughtful and thought provoking interview that will challenge the perceptions of this singular and legacy project that simultaneously defines ‚industrial‘ and rises far above its contorted and misunderstood ‚culture‘ from the outside and within.
edition of 250
remastered and transferred by Kris Lapke (Alberich).
Includes download code of the lp and the interview. 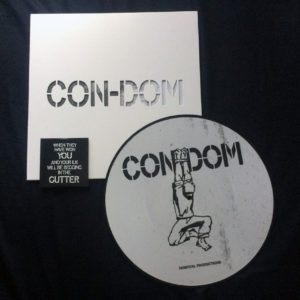