Life Is A Mass… ‘Exploitation’ is the new film by Dutch independent filmmaker Edwin Brienen. Enfant Terrible produced the soundtrack for this gothic-noir satiric fresco. 90 minutes of music to be enjoyed both as true soundtrack as well as a sequel to previous Enfant Terrible compilations… but more dramatic and ritualistic in the way the record is building up… it will please fans of minimal electronics and (post) industrial music but also moves into different styles such as idm, tekno, angst pop and chanson… while always keeping a dark and cold mood and/or dream state feeling throughout… A little more about Edwin Brienen… he enjoys poking at sensitive subjects of our post 9/11 era and post-postmodern period: religion, sex, and politics; from fundamentalist islam to the prudish christianism, through exuberant homosexuality, and the delusion of formated heterosexuality. This provocateur brings together in his artwork many contradictory features. The innocence that can be perceived in some of his movies is incongruous with his characters’ excessive violence and inconsiderate nihilism. But this is just an apparent contradiction. What unites his movies is Brienen’s frankness with which he displays a corrupt system. The honesty and instantness of his films risk to be mistaken for a lack of subtlety, but are in fact the striving for total freedom of expression. A little more about the film… “Exploitation” uses the so-called ‘mise en abyme’ principle and shows a fictitious film in the film, called “Apocalypse, Part 3”: a breathtaking ‘Abendland’ of dreamy pictures and nightmarish visions. It’s all there: baphomets, paganism, bizarre costumes. Especially some old-time obsessions of the director are highly celebrated here: the esthetics of Death in June, the works of painter Arnold Böcklin, or Aleister Crowley’s Thelema spirituality. The film had its premiere at the Lausanne Underground Film and Music Festival in October 2012. Tracklisting: A1 Neugeborene Nachtmusik – Cookie Jar A2Europ Europ – Affection Addict A3 Nihiltronix – Mass A4 Europ Europ – Hard Scores (Instrumental) A5 Distel – Fall soundsample B1 Former Descent – Accepting Transmissions B2 Europ Europ – Harsh Love (Female Version) B3 Sololust – Believe Me B4 Zarkoff – Wormwood Sonatina C1 Europ Europ – Stormy Pacific (Extended) C2 The Spectrometers – Mars En Train C3 Unité November – Novo Uomo C4 Neugeborene Nachtmusik – Han Dog soundsample D1 Embers – Swamp Thing (Instrumental) soundsample D2 oplen – Skikt D3 The New Age – Soft Touch Enfant Terrible ET017 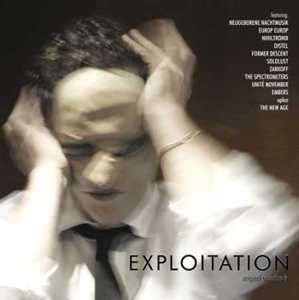