Limited edition of 300 copies pressed on white vinyl, includes CD with 4 bonus tracks – CD is lim.ed.250.
review in post punk:
“I really like it. It’s original and evocative. – John Carpenter
Such praise from someone like Carpenter is enough for me to stop typing now because that’s all you really need for confirmation of The Devil & The Universe’s new LP Haunted Summer that is released – and how fittingly – on Halloween this year. The Austrian band does not disappoint as Haunted Summer picks up where their EP What Time Is Love? left off. I like to compare TDATU to Delerium (a Frontline Assembly side project) intertwined with Renegade Soundwave, and Psychick Warriors ov Gaia. If you’re not aware of these bands, all of them focus on tribal drums – the element that connects the tracks on Haunted Summer to one another.
Haunted Summer is more of a soundtrack than an album composed of disparate songs. Inspired by Lord Byron’s summer on Lake Geneva in 1816, with guests such as Percy and Mary Shelley (author of Frankenstein), TDATU evoked the ghost of that summer by living in a small chapel in the forest of Styria, Austria for four weeks. Byron, Shelley, and friends fought boredom that summer by ingesting drugs, sex and seances while the members of TDATU performed occult rituals to form their musical ambition. Psycholgically changed after that summer, many guests of Lord Byron’s were affected by the experience, especially Mary Shelley who went on to write her famous horror novel. To pull from someone else’s experience instead of one’s own is an interesting twist on the making of an album and it proved to be a positive outcome for TDATU. There is a seriousness and sincerity within the storytelling of Haunted Summer – such in the manner of Victorian gothic fiction.
The album, mostly instrumental but littered with cleverly placed samples, creates a mise-en-scene for the summer of 1816. “Haunted Summer,” the first track, is an excellent precursor to what follows with its funereal tribal beats. I am inclined to love more dance and even techo-based, tracks such as “Stygian” (which means extremely dark, gloomy or forbidding), “The Goat Head” and “Calling of the Shades.” The first single, “Danaus Plexippus” is another stellar track with a killer bass line, reminiscent to oldschool industrial-techno sounds.
Being a skeptic of new music (coming from a severe love of 1980s music), I find The Devil & The Universe refreshing. They pull from other sources that many current bands do not in terms of tribal sounds and drum patterns. It is not an album for the commute to work, mind you, but is something to listen to in solitude. John Carpenter is right: Haunted Summer is extremely original and without a doubt, evocative.” 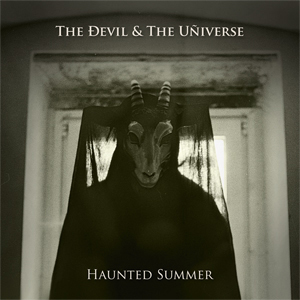