Words swaixtix, svastika, svaiksti have a common root that in Sanskrit or Indo-European mother-tongue means to shine, to glow, light. Svaixt, coming from Laurynas Jukonis, the master of the Lithuanian post-industrial, is one more project revealing his sincere interest in the roots of the civilisation, the beginning of the archaic, multi-meaningful, solid and conflictless reality. Demo version of Svaixt album Virsme versmë was released in 50 copies by the very author in CDR format and sold in a blink. The album for the second edition was complemented by new material placing new stress in its concept. Svaixt music consists of deep, pulsating and very transparent ambient building up mystic, arcane atmosphere. The value of the album lies in the absence of digital sound generating means in the recording. Virsme versmë was recorded by playing the single brass percussion inducing meditation and providing the sound with a strong oriental zest. The cover of Svaixt Virsme versmë contains the photo of the legendary marsh opening ëlos Akis located in the Lithuanian region Dzûkija, whereas the CD is packed in the elegant digipak. 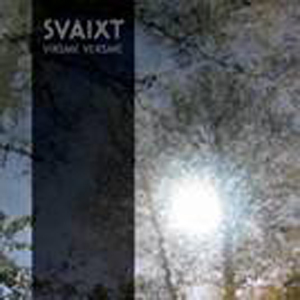