annihilationist shows prurient’s instrumental ambient side, though it’s an ambient littered with noises and frightening ruptures. the only audible trace of voice on annihilationist is the word ‘japan’.
abstract voices and gasps of air bubble to the top of the dark water, as the hardest elements of industry like perverse atonal bass tones swinging back n forth like a pendulum in the underworld …
recorded in the hospital productions basement studio in lower manhattan during a personal end of days, alongside long time collaborator alberich at the abacus of additional synthesizer.
another sinking ship? even though the pacific ocean is the larger body, the atlantic contains the darker waters. the corrupted and corroding dials and metals grapple under the pressure to wield their reports bound to the rhythm of the marine vessels.
but this isn’t the ambient of the destroyer or aircraft carrier. this is the ambient of the submarine. a twisted quiet crammed claustrophobia-ridden approach to ‘linear electronics’. minimal cacophony set to drones, crumbling barrages, surges of clatter and collapsing frescoes.
japan via rome? although no connection seems apparent between ancient rome and imperial japan, perhaps an echo of cataclysm richochets across the two great bodies of water and the echoes of destroyed empires are suspended in time.
an imperative for the ‘annihilationist worldview’ upon which hell is skipped and god simply annihilates the souls from existing within the afterlife itself, let alone hell.
conditional electronic ambient industrial 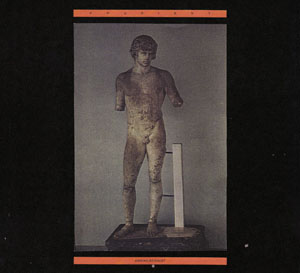