HOROLOGIUM – A HANDFUL OF DUST AND ASHES – CD

Released in a middle-mounted six-panel digipak.

Tracks 1-10 were recorded between December 2004 and February 2005, previously released by Cynfeirdd in an amount of 141 copies on CDr under the title A Handful Of Dust.

The catalogue number on the cover is misprinted. It states “Zohar 013-2” when the factual one is “ZOHAR 013-2”.
Also the title is misspelled ‚A Hanful Of Dust And Ashes‘. 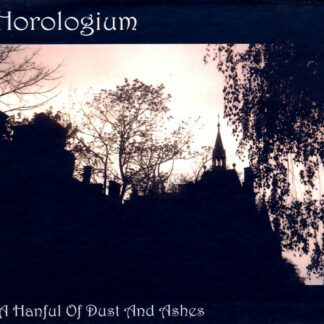