New Forces is proud to present the first in a series of CD boxsets reissuing the catalog of Hands To, the legendary recording project of artist Jeph Jerman. “Bio Electric” collects the five “body sounds” tapes released by Hands To in the late 1980s while Jeph was living in Colorado: Maesh, Decesh, Invesh, Aggresh, and Recesh.

As Jeph recollects in the linter notes, “I had begun investigating the use of human body sounds after noticing a definite physical effect while listening to one of my earlier pieces which had used them. I can only describe the feeling as an alert calmness. I found it very odd, and wondered if anyone else would be affected. As I am often want to do, I became mildly obsessed by the question and set to work amassing a small library of (mostly) human body sounds. These were collected, from myself and a few understanding friends, using small hand held tape recorders and various cheap microphones. A tape of heartbeats found in a thrift store was used extensively. Michael Moynihan kindly sent me a recording of his Tibetan thigh bone trumpet, and I got sounds off the television and a few video tapes. I used these to create audio collages with different combinations of sounds, and ended up with about 5 hours worth of stuff. With these tapes, I was a attempting to make something other than entertainment, and the suggestions included were intended to prod a listener into paying attention to the sounds, as opposed to using them as background noise or trying to parse their musical structure.”

The resulting cassettes represent the finest of the Hands To discography, pushing 1980’s “cassette culture” experimentation to its absolute peak in ways that predict much of what the modern experimental listener takes for granted. “Harsh noise,” “tape music,” “sound art,” “ambient,” “textural noise,” these are only some of the now-codified genre markers that careful listeners will find in Bio Electric, but these recordings stand alone in their approach to recorded sound. An absolutely mandatory collection for any fan of noise, industrial, and experimental sounds that continues to inspire after more than three decades.

Each disc is housed in an individual slip-case that reproduces the original artwork. The collection is contained in a hard clamshell case, and includes an 8 page booklet with liner notes by Jeph Jerman and additional artwork, flyers, and pictures. The recordings were expertly mastered for CD from Jeph Jerman’s archival tapes by Grant Richardson, and the boxset was designed by John Wiese. For more information on Jeph’s work and the “body sounds” tapes of Hands To, check out the Noisextra podcast interview with Jeph, and the feature on the cassette “Decesh,” which is included in this box. 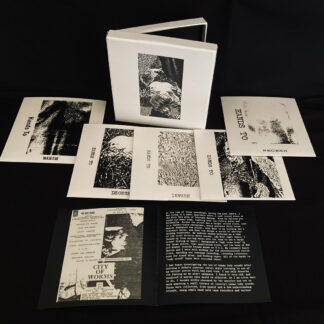