(Nekofutschata # Neko19, LP – olive green marbled vinyl – 6 tracks – lim. to 311 copies)
Ritual severity, that certain trademark pop sensitivity and a rampant punk attitude all collide in COÀGUL’s latest offering “TOT ENCAIXA!”, which leaves the esoteric, conceptual paths of its highly acclaimed predecessor and therefore focuses on political topics and social issues backlit through the prismatic eyes of Barcelona based Marc O’ Callaghan. A six track tour de force of harsh synths, invoking chants and sounds charged with meaning, drawing inspiration from neurolinguistic programming, pharmaceuticals, the classic Catalan poet Jacint Verdaguer and the synchronicity of the universe &.among others. Housed in a sleeve showing murals illustrating local tales of the Spanish Moià area, this is the first release through NOVY SVET’s label NEKOFUTSCHATA in years. When Frl. Tost and J. Weber were getting the chance to release an album by one of their all-time-favourite artists, they just could not permit themselves to let that chance go. Comes with inlay and fully loaded with energy. 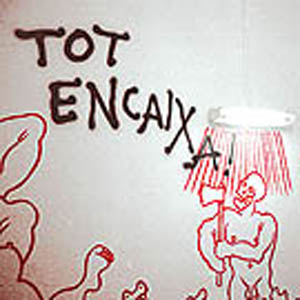