“BILLY CHAINSAW’S ALPHABILL (a love story)”: an art exhibition
London’s Horse Hospital from 6 – 28 March 2015.
Billy Chainsaw says: “While re-watching Godard’s Alphaville some years ago, the thematic and visual similarities between the movie and the writings of William S. Burroughs hit me harder than a slug from a .45. The more I investigated the connections, the more apparent they became… until my journey reached a conclusion that resonates in Burroughs’ last ever written words: ‘Love? What is it? Most natural painkiller what there is. LOVE’.”
Anni Hogan & Billy Chainsaw formed C.H.I.P. Chainsaw.Hogan. Installation.Project. in January 2014 and launched their long term multi media collaboration with a Chainsaw film & Hogan musical performance at the Queen Elizabeth Hall in London October 2014 for Richard Strange ‘Burroughs mini=meltdown’ ‘Language is A Virus from Outerspace’ Alphabill is the first in a series of C.H.I.P. releases leading up to a major multi media installation in 2016
Music for Billy Chainsaw’s Alphabill…a love story 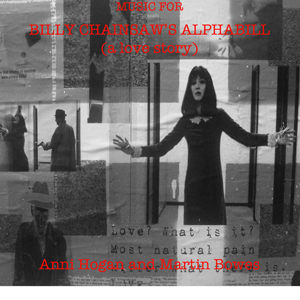