Second album and as with its predecessor it is an album of traditional songs, but unlike The Bitter Harvest which consisted predominantly of unaccompanied songs the tracks on The Amfortas Wound are accompanied by drones, loops, harmonium and flute organ arrangements. For these arrangements Andrew King was joined by fellow travelers Hunter Barr in charge of the mastering and mixing and with additional drones supplied by Andrew Trail and drums from Jonh Murphy. Understandably, with these collaborators The Amfortas Wound is a darker album than its predecessor but it should be emphasized that it is still first and foremost an album of traditional song to which Andrew King has brought his noted academic expertise and considerable experience in vernacular culture. The extensive full color digipack booklet that Athanor has provided contains complete lyrics as well as critical notes that place each song within its historic, vernacular and textual context, whether as 18th Century Broadside ballad, Masonic initiation song or heroic example of Medieval pan-European Balladry. As well as the text the booklet is illustrated by four of Andrew Kings paintings, the title painting and three of his Alchemical Emblems. Digipack CD with 16 pages booklet with all the texts and infos on each songs. (Athanor) 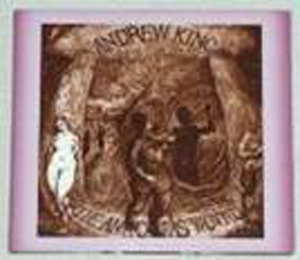