Active since the late ’80s as a member of MZ.412 and Pouppée Fabrikk, few names within the realm of dark industrial and blackened ambient carry more weight and presence than Sweden’s mighty Nordvargr. Though side projects Muskel and Körperwelten have been released on Malignant, The Secret Barbarous Names is the first solo recording done for the label, and Nordvargr’s first physical release since 2013’s The Dromopoda Transmissions on Old Europa Café.
A vocal based work inspired by the Draconian and Typhonian traditions, the title refers to the hidden meanings of the countless manuscripts that have been kept secret for millennia – their supposed effectiveness resting in their utterance, not their meaning. The words of power, vibrated at the correct frequency and amplitude in the correct setting and time, have the power to manifest anything. As such, these are an incredibly haunting and formidable invocations, built upon richly timbered, incantatory vocals and deep, liturgical chants, and occasionally augmented by ominous orchestral swell and ritual percussion. All of it is endlessly stretched out into lightless passages of primordial malevolence and suffocating dread, completing an album that will stand out as a highlight, even within such a lofty and illustrious discography as Nordvargr’s. Lavishly packaged in a digipak designed by Margaux Renaudin (Anima Nostra). 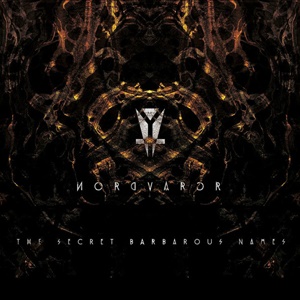