NIHIL NOVI SUB SOLE (=”Nothing new under the sun”) is a Dutch Ambient/Industrial outfit residing in the Netherlands. The Band has been formed in early 2008 after the demise of the Dutch Dark Metal Band Deinonychus. Marco Kehren who was the founding member of Deinonychus decided to create something completely different from what he had done two decades long in the metal scene – to create a vast brand of Dark Ambient sounds combined with Industrial ingredients as well Martial sounding drums. NIHIL NOVI SUB SOLE has build a vast and existent concept dealing with the sheer terror of war and the consequence brought forth from it. Unlike many have done previous with war concepts to be used in music, NIHIL NOVI SUB SOLE has derived a concept based on Witness-accounts, Court-Trial events and other related samples to convey a most sad and bitter post-War feeling, and share with the listener something else than a just Propaganda-like stigma. As no political motive is to be found in the concept of NIHIL NOVI SUB SOLE’s songs, nor any tolerance is granted. NIHIL NOVI SUB SOLE’s debut album “Jupiter Temple”is in it’s entirely dedicated to all unfortunate, who never had the chance to live in freedom, living their ideal. Or have lost their live in the name of intolerance and ignorance. Comes in A5 Digipak (LICHTERKLANG) echo057 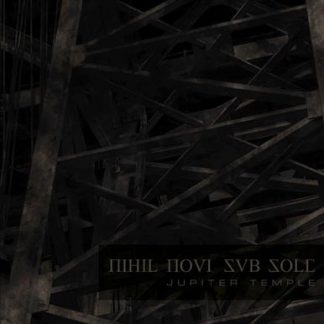