“Mortar Devotions” is the new collaboration between Nona Et Decima (Manuele Frau, Nicholas Pucciarelli) and Aleksei Tsernjavski alias Огни. From the Finnish capital, Helsinki, the trio gives life to “Operazione Piovra: The Lead Chronicles”, a work inspired by the darkest pages of Italian history, in particular the “years of lead” and the war between the mafia and government. The five tracks are conceived as if they were the soundtrack, divided into parts, of a film or a television series dedicated to the delicate theme previously highlighted. Tension, claustrophobia, mystery. A dirty, vintage, demolished sound coming from the speakers of an old cathode tube television or a cheap radio with only one broken speaker.

Mortar Devotion’s music is solidly rooted in the industrial and noise scenes, taking inspiration from artists like Vatican Shadow, and Muslimgauze. But thanks to an extremely cinematic approach derived from their love of Italian soundtracks composers like Morricone, Frizzi, and the progressive band Goblin, they have created an extraordinarily original sound, which could be called: “Industrial Moving Pictures”. 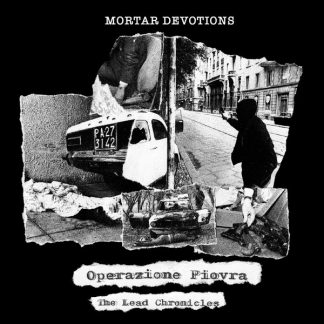