An endless world stretches along the path of a wanderer. Thousands of
trails run not only on solid ground underfoot but also through main
streams and rapids of the wayward rivers, striving to carry a
daredevil into their depths. Sometimes they take the wanderer down to
the underworld or take his soul to the skies with the smoke of a
ritual fire.

The border between the worlds is thinning in the fog and the
twilight… A shaman is the only one who is able to travel along a
thousand paths, and return back on a narrow path known only to him
alone. But the time will come, and his soul will stop wandering
between the worlds. Spreading its gray wings, his soul will be carried
away along the path known only to him alone.

The upcoming Liholesie album Shamanic Twilight will tell you about it.

Folk instruments and ethnic percussion will bring you back for
thousands of years and plunge you into the atmosphere of shamanic
rituals and visions. Twilight is upon… the fire is burning out, the
shamanic drum is beating… There are thousands of paths in the smoky
haze.

Liholesie is a sophisticated Russian ethnic-ambient act, whose first
demo was released back in 2002. From 2004 to 2008, Liholesie released
four albums and a split with several metal bands. The project’s music
underwent changes from epic folk ambience to a more ritual atmosphere,
so Liholesie became one of the most famous Russian ambient projects,
whose audience included the fans of different styles, from black metal
to neofolk. Then there was a period of silence, which ended only in
2016 with The Fog of Transition full-length album. It was the music of
untouched nature, lucid dreams, and shamanic trips inspired by a
journey to the Altai Mountains. In 2018 Liholesie released the EP
Fables. It varies from the previous works in more cinematographic
sound and mood, continuing to explore new horizons of ethnic and
ritual music. And now it is high time for a new chapter in the
project’s history with the new album Shamanic Twilight. That’s the
music of dark woods, forgotten tribal rituals, and spiritual quests,
somewhere in between Nordic folk, darkwave, and ritual ambient.

Tracklist:
1. From Roots To Boughs
2. Thousands Of Pathways
3. Flame In The Backwoods
4. Sorrow Of The Depths
5. Vision Quest
6. Shamanic Twilight
7. The Night After The Ritual
8. Depth Of The Predawn Skies
9. Gray Wings 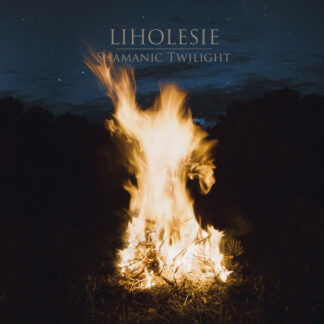