Kadaver is most likely the most extreme musical act in the middle east, focusing on harsh noise,death industrial and power electronics. For roughly a decade and a half now, Israeli based Michael Zolotov, has been releasing some of the most vile and disturbing “audio-terror” out there under the Kadaver banner.
“Ain’t love grand?”, his new weapon, is just that. Harsh, personal, cold and bleak. Music for your end. 2018 – CD format. 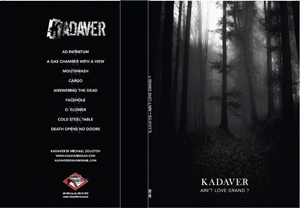