Kali in bestial form. Grim speech from the shadow land. Satan at your back. Reigning dusk with maliciousness. Spite in the form of viral knives. This is the brainchild of Industrial/Noise/Black Metal artist Thomas Mortigan. Locked away within a mind like a churning worm in the earth, this score for a non existent film is a dismally dark and frightening affair. Field recordings meet treated and inhuman dialect, sounds from behind, the dripping, creeping, gaping walkway into nightmare and fear. This is the sound of a mad mind. A fully live studio recording, which makes this experience even more real and intimate. This frightening electronic/noise/score release is a must for horror fans and the minds of the mad. Pro CD limited to 200 copies. Originally released as a C-45 on Destructive Industries in 2009 in an edition of 45. LW65 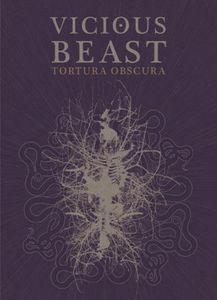