Re-Press with slightly changed Digipak artwork and new catalog number to accompany the current vinyl edition.
33 years have passed since :Leichenlinie: got released the 1st time.
This material stands for one of the most wanted records in this genre for all times. :Leichenlinie: remains as an outstanding release in the german post industrial music genre. The well-balanced music contains power electronic rhythm based tracks as well as dark drowning ambient pieces with haunting samples.  The CD version comes in a nice spot varnished digipack with the logo debossed on the front cover. Genocide Organ got founded in 1985. :Leichenlinie: material got recorded between 1987-1989 at Strebelwerk/Mannheim. Originally released in 1989 as Tesco 001. :Leichenlinie: is still an outstanding milestone in europeon „post industrial“ music as it let loose new creative energy of a genre which was thought to be dead. The socio-political criticism, and cultural-terrorist approach is inherent. A document of its time! The opening opus of the bands restless striving for more depth in a shallow reality, in a society that likes to hide the unpleasant and controversial sides of life. The phrase „noli me tangere“ is no longer in effect!
This new CD edition replaces the 20 years anniversary edition from 2009 and same master of Jason Mantis was used again incl. the 2 additional tracks formerly released on the Monochrome Meditator MC (SSSM/Japan 1991).
: Der Tod ist ein geradliniger Prozess :
( Death is a straightforward process)

This Is No Lie 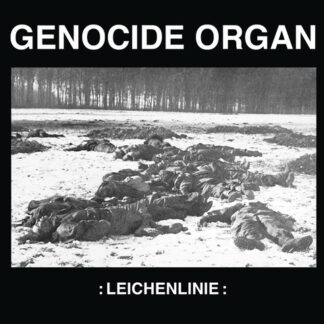