Geins’t Naït is a project initiated in 1986 with a first album released by Thierry Merigout (drummer with Kas Product on their 1981 tour) and Vincent Hachet, who quickly stepped back from this project to work on his film-maker career. The L’or’n Cät album’s release in 1987 marked the arrival of Laurent Petitgand, a singer-songwriter recognized for his composing work for (the late French singer) Bashung and original soundtracks for film directors such as Wim Wenders (including Tokyo-Ga, 1985, Wings of Desire, 1986, and the future The Salt of the Earth, scheduled in 2014), Paul Auster (The Inner Life of Martin Frost), as well as ballet music for Angelin Preljocaj (Liqueurs de Chair, Amer America). Bases are thus set down. While Geins’t Naït offers rough pieces of music as an extension of its punk attitude which deeply moved the Berlin scene years ago, Laurent Petitgand is busy refining them and creating some musicality within the post-industrial collages, adding guitars, piano or any classical instrument. In 1993, following the release of C/O Lisa on the Permis de Construire label, noise gave way to a silence that lasted 20 years. Coming from nowhere, Si j’avais su, j’aurais rien dit, a particularly tormented album which, against all odds, revived the project in 2011. An album which showed an increasing alchemy between the two musicians whose different routes, this common project aside, seem to fit perfectly well now. Now, and more than ever, the duo’s approach is based on an in-depth field. To sharpen the sounds, give them some kind of balance, a density and a mark. More than anything else, to make sure that music is a langage, an experience in the deeper meaning of the term. In its form, the collaboration between Geins’t Naït and Laurent Petitgand echoes the adventurous musics from the eighties and is the French counterpoint to experimental british scenes (Coil, Current 93, Test Dept) and german scenes (Einstürzende Neubauten, Sprung Aus Den Wolken), so much so that this new work is difficult to label in its totality, entering ambient or industrial fields, as well as minimalist or repetitive music. Je vous dis is obvious in its ability for listeners to give life to the smallest element which is part of it, would it be a sample, a piano melody, or even the amazing work on voices, which, as well as instrumentation, assume a central part in the tracks balance. Melancholic, with a retained violence, sometimes even with a fearsome violence, Je vous dis surprises and captivates in its way to subtly catch the listener, thanks to a disturbing nocturnal mood, but also to an unsettling humanity. But this record is far from being an hermetical work : it’s quite the opposite. Difficulty is not to get in this world, however particular or deviant it is, but to get out. More than just music, Je vous dis is a visceral obsession about detail, a sound sculpture with changing forms and various aspects, an unsleeping creature with inscrutable soul. As soon as one believes to have understood it, the next listening brings the listener back into doubt and questions. As in a situationist movie for which that album would be a perfect soundtrack, each complete immersion offers its lot of news interpretations and details, with were unkown until now but are definitively obvious in the end. A real masterpiece for the mind : complex, poetic and sophisticated, even in its darkest moments.
ICI D’AILLEURS MTLP1 / MTCD 1 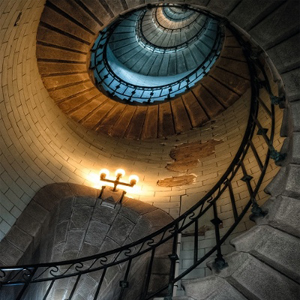