Both acts featured on this disc have been featured on North Fuller Avenue before, so they need no introduction. The album features three separate tracks by each artist and a collaborative piece, all were made by exchanges of sound files. The booklet text -One- is by Zorin, it is cut up from texts of Rueigo (1982) and photos of different landscapes fill the inner pages. I read the text before playing, it seems to me to be about Art and life; how the two can be hard to combine or co-exist.

The clang of the self-made instruments of Entre Vifs kicks in, I find the opening session (50A-1) to be confrontational and raw in its language. The rawness comes from it being a lot more cut up than other tracks (or cut into with stops and starts), like the text. The usual complex sophistication of the sound eventually grows and builds up. Session 51B is abrasive like the first track yet the noises contrast each other massively, the exchanges are tense and form a fractured sound. As the busyness caused by build ups of noise increases and decreases the tension of sound is always shifting separately to this. The oddness of the primal sound, dynamics and tension also create a rich atmosphere to the sound throughout each session, Spasmotronics is a key example of this as it shifts and changes. The cuts in the sound occur via a deep, farty, vibrating sound that goes off throughout the track as if to break the flow of the scraping noises. Throbbing noise and explosive distortions combine to make a choppy barrage of noises.

L’Eclipse Nue take the cut-up approach even further on The Same Eyes as broken distortion and unbroken dialogue play off each other. As the array of sounds grows, things still stay broken and fractured, but the build is immense and big noise is what L’Eclipse does best, but the long breakdown and minimal passages of sound here are strong too using the space in the sound for a dialogue of sound. In the past I have felt the quieter passages of sound are the project’s weakness, here this is the opposite, the experimentation and subtle interplay are solid. This is most prominent on Each One A Witness, the build-up is slow and elements of sound interact as if in constant experimentation. As more abrasive elements come in, even on a quieter level the impact is significant. Copper and Spit is the most aggressive offering from L’Eclipse, the use of restraint is impressive as this is varied throughout the track and creates good tension and control. As the restraint is loosened the sound is immense.

The finale L’Eclipse Vive gets its own paragraph; this is where our Aussaat heroes combine to become one. The low-level noise passages are good, there are dramatic build ups and explosions of sound going off. The sound continually seems to change and not stay in one place too long making for an ever shifting landscape of sound. Both artists enhance the others qualities.

Each track follows on from artist to artist very smoothly and all works tie in well with the other – it flows perfectly. The consistent strength of Entre Vifs work is a hard act to match, but L’Eclipse does this effortlessly with strong work. Looking at the cd before playing, it seemed impossible for two so seemingly different artists to match up, but they do, the tracks are clearly thought out and considered making for an airtight, excellent release. 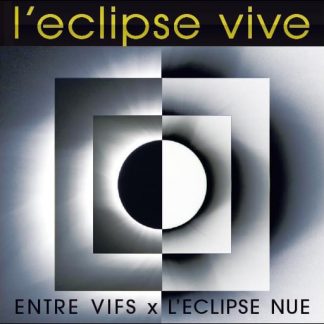