The new release in the series is to commemorate the Heilige Feuer 6 festival which was held in December 2006 in Moscow. This is also a dedication to our good friend and true comrade Eduard Chernyshov whose enthusiasm, energy, activity and creativity once gave birth to Heilige Feuer festival and who has sadly passed away in late 2005. The double CD includes two exclusive tracks from the festival participants: A Challenge Of Honour, Anthesteria, Des Esseintes, I-C-K, Kryptogen Rundfunk, Leiche Rustikal, The Protagonist, and Radio Murmansk. The release comes as a deluxe double digisleeve printed with bronze on the luxury designer’s paper, it is encased in a special box with the embossment of the festival logo. The release is limited to 500. 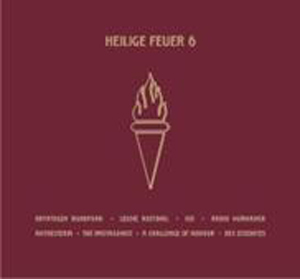