Feat: THE GREEN MAN, ROMA AMOR, EGIDA AUREA, HAVING THIN MOONSHINE An Introduction to Folk Studio by Eliahu Giudice: You have in your hand the first issue of the Folkstudio series by HR!SPQR. A series which strives to offer something that this time, with good reason, may be called Italian neo-folk: Old songs and new ones which recapture the spirit of the place they were born in, which delve their roots in folklore, reinterpreting it, necessarily, in modern key. It constitutes an attempt to sincerely recover the “volkisch” spirit of our land without any etno-nationalist or political intentions whatsoever. A hand to the past and an eye to the future, with an instrumentation that tries to unite the two distinct feelings. Rusticity and town fairs which cover the sound of military drums, a glass of our best red wine instead of Bavarian beer. And an open eye to our traditions and dialects which run the risk of extinction generation after generation.All of this is Folkstudio. Artwork and mastering by Lucifer Sam HR!SPQR XVIII 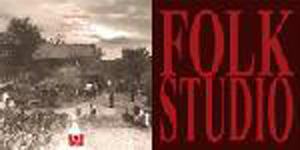