“Thee text ov ‘A Hollow Cost’ began as a spoken word (world) routine in 1979 in England and has gone through many permutations and infestations since that T.I.M.E. For a long T.I.M.E. thee writing was referred to as “THEE THROTTLE” and was first published as such in RADIUM 226.05 Magazine, Stockholm, Sweden in their Spring 1986 issue. Another, expanded version was published in thee first and subsequent editions ov ‘ESOTERRORIST’, an anthology of texts and collages by Genesis Breyer P-Orridge edited by Tom Hallewell in Denver, Colorado, U.S.A. in 1989. Since then it has been uploaded on countless websites unofficially. This CD re-release is thee only official artifact and has been digitally re-mastered under thee supervision ov thee author. Accept no substitutes or previous copies ov this remarkable recording. Let thee invisible remain invisible and support thee writer and musicians ov THEE MAJESTY and this ongoing series ov unique, radically hybridized and influential spoken worlds.” 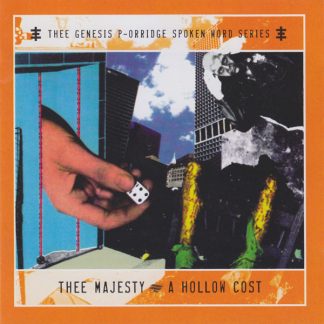