LP on 180g vinyl in 350gsm sleeve. Ltd x 500 copies.
The new album by She Spread Sorrow (Alice Kundalini) is the story of a huntress and her morbid and psychotic relationship with her prey. The protagonist is Blue, a girl whose existence is marked by obsession with another woman of the same age and by nightmares that leave her without peace. Between love and psychosis, a tragic story is consumed, which vibrates in the stomach, like the music that accompanies it – dark and hypnotic death industrial, with moments of dark ambient, power electronics and noise.

Inspired by Kundalini’s nightmares and her fervent world of dreams, “Huntress” was born after 3 years of intense recordings. It pursues the need to whisper secret, forbidden tales and to stimulate the deepest shadows of the human being, exploring the boundaries between the delicate and the violent; between love and obsession; between fantasy and madness.

“Huntress” is the soundtrack of a tragic game between opposites in a reality of total solitude. 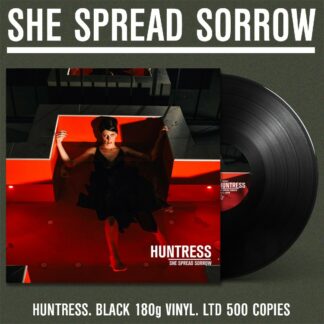