Over a series of remarkable concept albums, the Luxembourgish band ROME have developed a totally unique ‘poetry of longing’ which rings out from the dark melancholic mist of rootlessness and which gives expression to a comprehensive feeling of modern forlornness. The protagonists of their music are the unintentional ‘rebels’ of Camus (The Rebel; original: L’Homme révolté), contemporaries from the turbulent epochs of the 20th century: the banished and the hunted; the despised and the misunderstood – always enemies of dictatorship. This is what the songs of Jerome Reuter are about, firmly in the tradition of his declared heroes JACQUES BREL and LÉO FERRÉ, (on earlier albums also TOM WAITS and NICK CAVE). As regards content, Rome are inspired by world literature and the observant listener will be able to detect references to and quotations from ALBERT CAMUS, MARCEL PROUST, JEAN-PAUL SARTRE and JEAN GENET. This serves to create a new kind of intertextuality between word and sound. Following on from their EP ‘L’Assassin’ (2010) ROME assiduously develop their sound further on the minimalistic, simple singer-songwriter album ‘Nos Chants Perdus’, slowly leaving the apocalyptic realms behind them. Catchy melodies, which breathe the timeless atmosphere of the metropolis on the Seine, impress themselves on the memory. The sonorous voice bears the weltschmerz as well as the yearning for freedom and peace. Apart from the French song titles the lyrics are primarily performed in English, while the music is constructed primarily with acoustic instruments: piano, guitar, touches of strings, accordion. They have largely relinquished electronic elements, which marks ‘Nos Chants Perdus’ out as a further stride in the work of the band. ‘Nos Chants Perdus’ by ROME is an exceptional and valuable example of the art of singer-songwriting, the likes of which haven’t been heard in this concentration and with such gravity for a long time. TRACKLISTING: L’Homme Revolte, Les Deracines, Le Chatiment Du Traitre, L’Assassin, Le Vertige Du Vide, Les Exigences De La Foi, La Commune, Sous La Dague, Les Isles Noires, Un Adieu A La Folie, La Rose Et La Hache, Chanson De Gestes CD re-release in Digipack 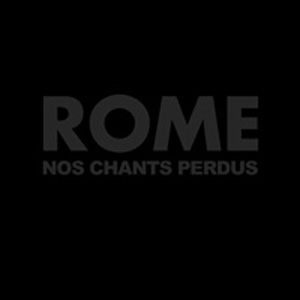