Peter Nystrom, the creator of the legendary “death industrial” project “Megaptera”, even working on his new project “Negru Voda” remains loyal to the traditional Scandinavian industrial music ideology and form. Inspired by the Nordic civilization Swedish man makes samples from the rates spreading of the iron mills and machines, as well as of different industry equipment functioning or failed, builds the massive rhythms from recorded sounds, transfers the sullen, frozen and oppressive industrial esthetics. Some of his works are of the lo-fi quality. The creator is striving to it on purpose, as the lo-fi often conveys the brutality and surly atmosphere better. Most suitable for the creation of such atmosphere are those festivals where the factor of coincidence or improvisation is constantly pending. Negru Voda “Unplugged” is one of such live records implementing the massive and brutal Nordic industrial philosophy, where the remixed tracks contain arduous, Scandinavian rhythm and dark psychedelic pulse generated by manipulations of the weird samples. The sounds of “Unplugged” were recorded during the festival ICETODIRON in Vilnius on 11 December 2004.
Album lasts for 38 min. It’s packed in a nontypical black plastic DVD case. Limited, hand numbered edition 279 copies. CD is covered with special lackuer which smells like an almond. 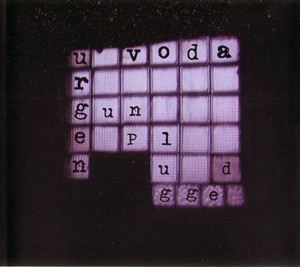