“Power, Propaganda, Production!” is the new MILITIA album and it’s a bull’s eye! The six famous muscle workers from Belgium have not only unleashed a new production following their 2005 album “Everything Is One” on the new defunct Tactical but have also set a new milestone in their long-running industrial career. The album contains eleven new studio tracks dealing with the very topics MILITIA has always been pointing at during their provocative career.

Militia is a Belgian industrial-percussion band, founded in 1989 by multi instrumentalists Frank Gorissen and Jo Billen. Most of our percussion instruments are made out of oil barrels and old metal parts from cars and machines. They combine these self made instruments with conventional drums, toms and cymbals. The band members also play a variety of self-made wind instruments and tools.

“Power, Propaganda, Production!” comes in a deluxe cardboard box with an 8-page booklet and a magnificent MILITIA politburo mini-poster, all designed by Metastazis from France. The six percussion players are lined up in front of the new flag, fists clenched, shoulder to shoulder, stronger than ever, armed with their huge metal and skin percussion installations to crash the corrupt systems under their boots! 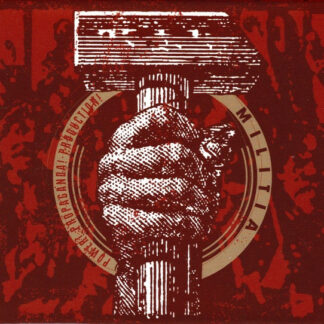