Ebola Disco hailing of course from far North Queensland, & Armenia from a similar humid tropical climate in a different part of the world… Ebola Disco’s “River Ratz” in its latent rhythms is reminiscent of perhaps a ramped up version of early Esplendor Geométrico. Just that bare skeletal rhythmic industrial style of throbbing oscillations as an example of what is meant by the comparison. Think “Amor En Mauthausen” or trace elements found on “El Acero del Partido” for examples… Thematically it reflects on many things: sugar cane crop burning under the blistering hot sun as disease vector rats run rampant in the drained river beds…a history of dead industry in north QLD… First recorded back in 2017, belatedly here “River Ratz” has found a sufficient format, re-fortified & edited anew alongside an underground name to match their calibre. Armenia is the solo project of Ecuadorian noise mercenary Leonardo Sabatto. Initially named after the Neubauten song but also the distant ideological massacres of Asia Minor, Armenia has been embedded primarily in the Americanoise scene for many years and active on the international noise mail circuit since sometime back in the ’90s… Armenia launches an all-out blizzard of embattled harsh noise on this side with “Desfigured Man of War” that feels deeply submerged in the context of ruthless Latin juntas. Harsh noise in a state of perpetual war that is severe like dengue & ends abruptly with circulatory failure & shock. After effects may include throbbing headache, hearing loss, nausea… 158 pressed, all black vinyl; with foldover cover sleeve in clear plastic slip case. 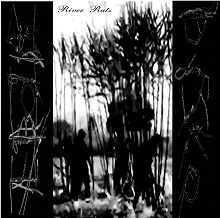