DA-SEIN – DEATH IS THE MOST CERTAIN POSSIBILITY – CD

hand-numbered limited edition of 529 copies.
Galakthorrö celebrates the presentation of Da-Sein’s first album. Da-Sein continue on the path they’ve established on their debut EP Tautology: The album is impressive with its musical variety, skilfully arranged without falling to pieces. Minimalistic Angst Pop smashers with driving rhythms alternate with abstract sound sculptures. In certain selected places gloomy melodies drag themselves up from a foundation of organised drones and noises generated by the analogue synth. Deadpan female vocals from the Crypt, embedded in clouds of echo and gigantic reverberations, condense the omnipresent Darkness and Hopelessness. Just as diffuse as the voice, Heidegger’s philosophy (used by the Artists as a stimulant) evaporates into the rather personal sounding lines of text. Only the title of the album, and of course the band’s name, remain as an unambiguous testimonial. It doesn’t matter, because Music opens the soul of both creator, and listener, to an equal extent. That happens here and that’s how it should be.
:: 12″ LP, black vinyl, sturdy cardboard cover, printed inner sleeve, insert card, hand-numbered 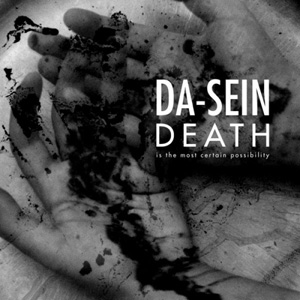