Italian cult band in which play 2 former members of AIN SOPH as well as other well known musicians of the Roman underground. At the time of the last release by Circus Joy “Improvvisa Azione Paganini”, noise was turned into pleasure and sex; in their new work, “Laetitia”, there is no pleasure in noise without sorrow, and sorrow takes over… this CD is not only a sonic tribute to Pop-Art, as its cover clearly shows, or to the noise-psychedelic rock of Velvet Underground (one of the most influential bands for Circus Joy): it’s a tribute to the recent and tragic departure of their friend and poet/singer, Letizia. “Laetitia” displays the two faces of Circus Joy: sensual, sick love ballads on one side and the crazy, electric, rides on the other. The record has been recorded between 2008 and 2009 at “Spectrelab” and “Trafalgar Studio Roma”, except for the last track “An Eccentric Garden” which has been realised putting together the single parts each of members did on their own, at their own place, then sending them via the internet to the others… Circus Joy is a group of non-musicians, long time friends who come together to produce noise by experimenting and improvising with their instruments. Formed in 1984 by Corrado Mancini, the line-up tends to change from release to release, for this album the line-up was completed by Spectre, Mario F.O.B., ClauDEDI and Steve StrolI. (OEC124) 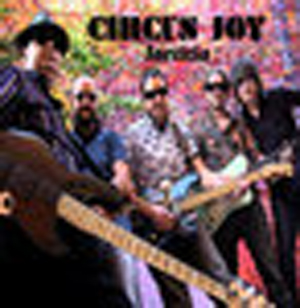