Improvisations Volume 1.
It’s been 12 years since the last official Voice of Eye release. During their long silence, VOE have been exploring further avenues of creation, through building a giant sculpture in the form of an Earthship, in the desert of New Mexico. Returning to the siren call of music, Emergence was realized Dec. ’06 – Jan. ’07. VOE felt it more authentic to return to an improvised approach for this project. The music emerging from this disc, including loops, was created live without overdubs. Track 1 was the first piece recorded, breaking the long silence. (Cover text)
Limited to 100 copies. Professionally duplicated CDr, housed in a slimline case, with a color insert.
Released to coincide with VOE’s reunion concert in Oakland, CA, and their subsequent European tour. 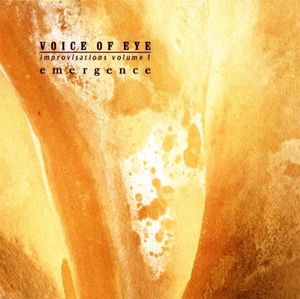