2xC20 professionally duplicated audio cassettes – silkscreened smoky-clear shells – in album case with printed inlay + 12-page booklet lim. ed. of 100 hand-numbered copies out now 13 years ago, on July 4th 1999, hardcore techno producer Leontin V. Abligaard, better known as TACITURNE, committed his infamous faked suicide. On each of the 7 days leading to his „death“, he composed a different song on his Amiga 500: a total of 7 songs and a few interludes, which were meant to be released as a posthumous double EP on the cult Parisian imprint BAD MING TUNES RECORDS. But as it so often happens, the album never saw the light of day, and those ultimate sinewave symphonies, between medieval chiptunes and neo-romantic new wave, lay dormant to this day. Here they are at last, presented on double cassette, including a 12-page booklet giving precious insights into the plots and counterplots of post-techno underground Paris at the end of the last millennium. tut024 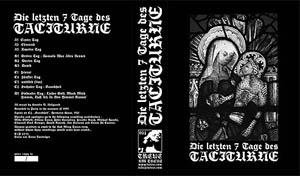