Not only is Robin Storey aka Rapoon a very prolific solo artist, but also he collaborates with many musicians from all over the world. He has already worked with Mykel Boys, Wyrm, Pas Musique, Kinder Atom, Cisfinitum, Pacific 231 et al. This time he teamed up with Shaun Sandor aka Promute to create 8 haunting tracks.
This is the story of their meeting in the words of Shaun Sandor: This collaboration between Rapoon and Promute is a direct result of the 2011 Endless Form Tour. For several nights in a row in different cities I sat in a swirling mist of sound conjured by Rapoon. The music easily generated notions of timelessness and seductive landscapes. In all of this, I was realizing that the electro-acoustic set that I was performing seemed to be a natural compliment to the music of Rapoon. I created several dozen tracks of homemade instruments, prepared guitar and bass, and sitar and sent them to Robin Storey to manipulate, process and edit. I asked my friend Des Kashyap to contribute some vocals as well, and he agreed. Robin added his music and vocals as well and did the arranging and mixing.
The CD is housed in an ecopak sleeve and is strictly limited to 500 copies. The cover is based on paintings by Shaun Sandor’s daughter and was designed by Maciej Mehring. „Machine River“ was mastered by Maciej Bartkowiak. The whole production process was overseen by Michał Porwet. 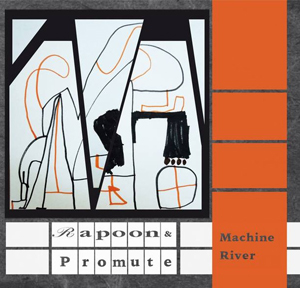