oureboros is a collaboration founded in 2006 by canadian artists rich oddie and aron west a.k.a. tnon. oddie, west and christina sealey formed orphx in 1993 to create psychedelic noisescapes inspired by early industrial music and the emerging japanese noise scene. in 1995, oddie and sealey began to incorporate more rhythmic elements into orphx and the two have gone on to establish themselves as innovators in the fusion of techno and industrial music. west left to co-found tropism – a diverse project encompassing harsh noise to discordant soundscapes to unclassifiable software based mutations. the tropism catalogue now numbers in excess of 300 entries, and the project continues as tropizm whose focus is all forms of experimental ambient electronics.

on their first album, oureboros deliver dark audio environments suitable as carriers to nether regions and beyond. the dense atmospheres vary from brooding to melancholic. electro-acoustic soundscapes are supplemented by intermittent guitar, percussion, and violin, creating a captivating hybrid of synthetic and organic elements. oddie and west present a unique fusion of deep ambient electronics, apocalyptic industrial, and ritualistic six-string walls of sound that evoke elements of black metal and shoegaze.

the project’s name is derived from the ouroboros, an ancient symbol of self-reflexivity, cyclicality, continuous re-creation and renewal. referring to oureboros, a suspenseful further development can be expected after this magnificent debut. 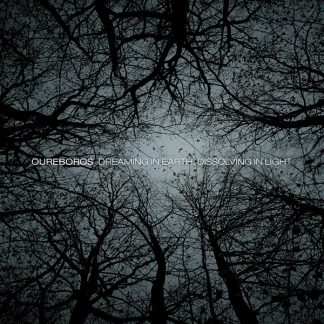