File, WAV, Album, Limited numbered special Edition, Bandcamp download plus A3 poster printed on high-quality, recycled paper. Limited to 100 numbered copies.
Comes in a fine black paper envelope with an illustrated seal.
Medusa, who else? – Noise Cluster (and friends)’s latest music project – looks afresh at the ancient myth from the modern perspective which
depicts the only attractive Gorgon not as the evil creature she is traditionally portrayed to be, but as a victim whose narrative was twisted to better serve a patriarchal culture.
Those who dared to look into her eyes were turned to stone because
of the coldness in their own hearts, but Medusa was blamed for the stony fortress constructed around their own souls.
Her hair was turned into magical snakes by the goddess Athena as a punishment for having been raped by the god Poseidon in her temple.
Her gaze was known to turn men into stone and only by a cunning trick did Perseus manage to behead her, during a supposedly suicide mission the king Polydectes had sent him on, in order to get rid of him and have a free hand with his mother.
In conclusion, this new musical interpretation illustrates how hers is the story of a witch-hunt, a case of victim blaming where the real perpetrator is condoned, thus turning her into a symbol of all the victims of sexual abuse.
credits
released November 16, 2022 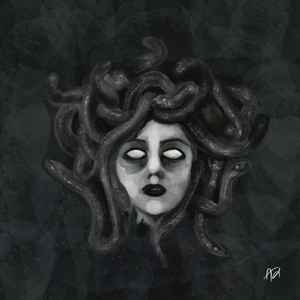