ATAVIST CRAFT is the collaboration work of ritual ambient project NAM-KHAR and german industrial veteran Peter Prochir the man behind SIELWOLF.
Released February 23, 2015 as a download and 29 April 29, 2015 as a Compact Disc on Sombre Soniks a label mainly specializing in Projects of a Ritual or Ethnomuzicologikal nature,
From a review by Merchants of Air.
There’s five tracks on Atavist Craft ranging from seven to fifteen minutes. All of them follow a similar pattern where drones, noises, sound manipulations seem to float freely, supported by some minimalist percussion and electronics. The result is simply stunning, a 45 minute trip through a dark, mysterious but wonderful world. The longest track, ‚Clost Indukt‘, starts of with some Tibetan singing bowls and gradually evolves into a creepy, industrial dark ambient piece where all kinds of noises appear and disappear.
…..
This enourmous blend of analog instruments, soundscapes and electronics makes Atavist Craft an even-changing album that somehow resembles Sephiroth, Hybryds or Job Karma. But it’s the unpredictability of this album that makes me like it even more. You really never know what’s going to happen and I’m sure that will be exactly the same after several listens. It sounds like the result of one or more live improvisations, making it more organic and spontaneous than some other dark ambient albums I’ve heard lately.“ 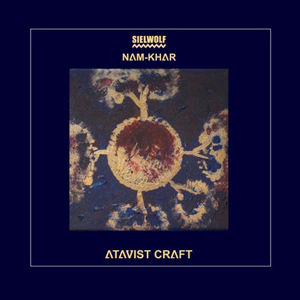