New full length album by one of France’s most singular contemporary composer. Reflecting on ancient culture’s use and reverence for emblematic monuments which most often represent myths and stories, the album’s narrative has been infused with such symbolic and depicts an envisioned mythology, unfolding through it’s 10 aural pieces. Franck Vigroux‘s music is unique and comprised of tectonic tension, pulsating rhythms and abrasive analog textures like few can produce. Applying his own calculated personal signature in his sonic explorations his distinctiveness comes not only by his unique approach to sound but also by his incorporation of new media practices and performing arts into his A/V work.
Mastering by Denis Blackham.
Cover Photography by Emile Barret, model Armand Yerly / 2010 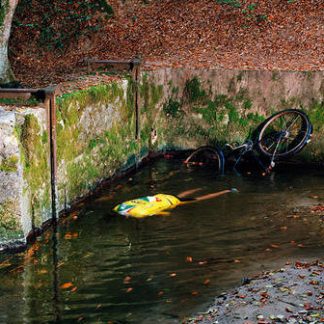