FIRE IN THE HEAD – “AS THE NEST BURNS” GOLDENCD

Fire In The Head is probably one of the garish artists of “noise/power electronics”, representing the famous school of the USA. The project’s author Michael Page previously participated at live performances of the legendary Giovanni Balistrer’s project SLOGUN, also closely linked to the livery of NY sound terrorists. “As The Nest Burns” is short, but highly hysterical, brutal and dark album of “noise/power electronics” stylistics. Michael Page masterly plays with amplitude of different tracks intension. Slackened, leaden, psychedelic sounds overgrow into the avalanche of terribly aggressive and hysterical noise, gradually flooding back as unusual and uncomfortable sound stream. “As The Nest Burns” is a sort of element of otherworld civilization, starting its sudden extension, transformation and smashing attack. There are many fragments of distorted vocal in this album, making the tracks especially threatful. This is a completely new, reformed attack of USA “power electronics” tradition against the normal and moral world. Do you know what happens as the nest burns??? Then the children burn!!! Written by Lashisha. 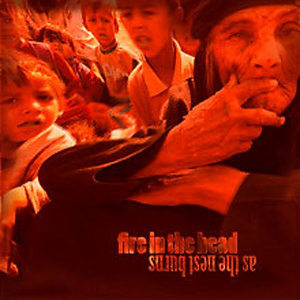