A CHALLENGE OF HONOR – NO WAY OUT – CD

Finally after a long pause, the new A CHALLENGE OF HONOUR album is out now! their last album “Seven Samurai” was released 4 years ago and in these past years many things changed (in) ACOH. with “No way out” you will hear a completely new side of ACOH. the album would be best described as a pure Neo(Pop)Folk album with many Neoclassical and some Martial elements. Peter learned to play several acoustic instruments in the last years and some guest musicians also helped to create the band’s new style. on “No way out” You hear acoustic piano, guitars, e-bass and contrabass, drums, violin and bells, as well as electronic instruments. most songs are with lyrics and have quite a dreamy and catchy atmosphere with monumental and heroic parts. some songs even spread a feeling of early 80ies independent music like Joy Division, the Fall, New Model Army,… 56 min./10 songs 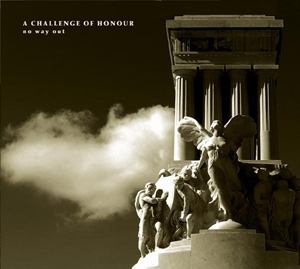